Back from Port Lincoln to Melbourne delivery

I'm back from Port Lincoln after a very pleasant trip.  It started on the 21st when I loaded my kit onto first a 737 at Melbourne Airport and then we transferred to a Dash 8 aircraft for the final leg to Port Lincoln.  The taxi's in Port Lincoln are excellent, very reasonably priced and there is also a bus service to the marina from the city centre.

I enjoyed the visit to Lincoln it's a town steeped in maritime and fishing history and at one stage sailing ships used to load cargo's of wheat in the harbour for transfer to Europe these days the wheat infrastructure consists of massive silos that are used to load wheat into bulk carriers for transfer to destinations around the world.  There is also quite a large commercial fishing fleet based in Port Lincoln.

Boston Bay itself is a very protected spot and the marina seems to offer plenty of berthing for even quite large multihulls I can imagine cruising the area being very enjoyable.  The great thing also about this area is the quite consistent winds which is of course great for sailing.  Also on my agenda in Port Lincoln was to have a quick look at the Lock Crowther Hemlock design trimaran 'Hasta la Vista'.  My delivery ride back is the 48' Chris White designed catamaran 'Peccadillo' you can see her in the background of the pic of 'Hasta'. 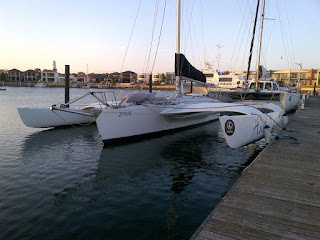 We had a few last minute repairs to carry out before leaving during the Lincoln Race Week the port running backstay became unloaded and struck the wind generator smashing off one of the carbon fibre blades.  The blades have to be changed as a set as they are balanced if you just change one blade it is liable to go out of balance and become noisy, load up the bearings and reduce output.

I met the crew with whom I would be carrying out the delivery I know Charles the owner of Peccadillo through the Multihull Yacht Club of Victoria of which he is the current Commodore.  Our crew consisted of Rex (ex Helly Hansen employee currently working at Hamilton Island sailing for a living (some people have it all :)),  Rusty (retired plumber and meticulous boatbuilder constructing a 40' Tony Grainger designed cruising cat and veteran sail tweaker and helmsman) and Rick (veteran of Three Peaks Race, yachtsman and all round good bloke).  I was the greenhorn/newbie I've sailed quite a bit over the years on small multihulls but big boat sailing on passage is very new to me thanks to the experienced and patient crew I have a more of an idea now offshore but still much to learn.

Peccadillo is a Chris White 48' Atlantic mkII catamaran it was constructed beautifully by a very careful home builder the hulls are of strip cedar construction with glass over the beams are strip cedar lattice type construction with carbon in the high load areas. The decks are durakore and the remaining areas of the pilot house are of marine plywood it's a very stiff structure and has no visible racking when being pushed.  It also has a front cockpit which I found to be very practical and made sailing the boat easy as all of the lines are in close proximity and comfortable seating is on both sides making it a very pleasant place to be.  It's also generally fairly dry in most conditions and has good drains allowing any water that enters to drain quickly and easily.  There is an outside helm that is mounted on a console and an inside helm in the pilot house.  When you select one helm the other automatically disconnects.  We mostly left steering to the very capable autopilot which we nicknamed "Sylvester" for the vaguely cat like noises it makes while actively steering the boat.

The pilot house contains an L shaped settee and table with seating for about six people it also contains (on the starboard side) a navigation console with wheel, plotter and instruments an AIS module has been added to the suite of equipment which is handy for spotting commercial shipping at long distance and establishing whether there is any risk of collision the incoming ships are visible on the chart plotter along with their speed and current heading.  the port side of the saloon contains a nav station and chart table with barometer and log.  Red lighting is provided in addition to white to prevent loss of night vision when it's dark or low visibility.  Down below there is the usual cantilever double berths amidships and a front v berth which could be considered a very snug double there are suction type manual pump heads on both sides of the boat just aft of the vee berth with hand basins and vanity units.  In the aft of the port hull there is a workshop forward of the hull entry from the pilot house and a shower behind the hull entry.  On the starboard side there is a galley down.  Auxillary power is provided by two yanmar 30 hp diesels one diesel is capable of propelling the boat at about 6 knots on cruise throttle settings with both engines on full you would see about 8 knots of speed.

We departed from the marina and into Porter Bay and then into Boston Bay around lunchtime on the 22nd of February the maneuverability provided by the twin yanmars allowed us to undock with ease and you are able to turn the boat in a little bit more than it's own length.  The marina in Port Lincoln (Lincoln Cove) is somewhat of a boaties paradise with easy access through it's entrance in all conditions and plenty of moorage for commercial craft, powerboats and visiting yachts.

After exiting Porter Bay we  navigated out into Spencer Gulf, South past Kangaroo Island through Spencer Gulf and South for about 150 nm into the Southern Ocean luckily we had useful winds for this first part of the trip and due to a lucky and steady wind shift we could gradually curve our course around to the East without the need for a gybe.  Strangely enough on this trip we generally had a useful breeze spring up about midday and carry through the night normally dropping with the dawn.  There are a few options for stopping along the coast of South Australia if you want to seek shelter or have a rest but our intention weather permitting was to travel through direct to Melbourne and as it worked out the weather was very favourable.

Over the first couple of days I was quite seasick not as bad as I've seen some poor sods suffer from it but it rendered me quite useless on the first day.  I think it was the confused sloppy type of seas we found ourselves in initially that made me queasy.  I used 'kwells' and followed their usage instructions but found they were not adequate to get the seasickness fully under control.  Charles had some stronger medication in the medicine chest which helped me get the motion sickness under control and by the second day out I was able to become a useful crewmember again and stand watches with the other crew.  I still struggled to sleep in the port forward v berth and spent most evenings sleeping on the pilot house berth.  Rick a man of much stronger constitution managed to tough it out in the often antigravity environment of the starboard side forward v berth.

﻿
We set ourselves up on a four hour watch rotation that allowed one crewmember to "float" each day and relax or attend to other jobs on the boat that might need doing.  A new experience for me was the sailing offshore at night it was quite an experience to have the boat on autopilot and watch the miles slip past with the sails well set and only reefing down for comfort when necessary and watching the moonlight in the boats streaming wake.  This design is an effortless consumer of miles and when sailing we easily logged 200+ mile days when the wind was there.  We had not motored much prior to Cape Otway at most times at worst motor sailing much of the time but the wind dropped out as we approached the Cape and died fully after we had just rounded it.  We motored most of the next day but a useful breeze once again arrived in the afternoon and we could once again appreciate the silence and those special sailing boat noises as the boat powered under sail through the night.  Surprisingly the Southern Ocean dished up pretty warm conditions with mid twenties for most evenings in the pilot house and our heavy duty wet weather gear didnt come out of it's bag with light spray jackets being the order of the day.  For safety we wore our lifejactkets at night but there was no need to use our tethers when operating the boat from the cockpit.
We saw plenty of wildlife on this trip including dolphins, soaring albatross, gannets and seals lazing about sleeping on their backs.  No great white shark sightings this trip we could only guess that the Port Lincoln shark tour boat was attracting their full attention with the standing joke being that there seemed to be less guests onboard for the inwards trip than the outwards from Port Lincoln.

Once again we experienced a windless morning the next day with the wind dropping out before dawn and springing up to a useful level as we approached Torquay for the approach to the famous Port Phillip bay entrance "the rip" we arrived nearly exactly on the slack water and had an easy passage through the heads and headed into the Western Channel of Port Phillip Bay.  There was quite a bit of active commercial shipping around so we watched the AIS carefully as we headed up the bay towards 'Pecca's' berth on the Yarra river at the Pier 34 Marina.  The wind had really kicked in and first Rusty and then Charles had fun surfing the waves and powering up the boat in the 25 knots breeze our top speed for the day was 18.6 knots set by Rusty with Charles not far behind on the speed stakes it was hands on sheets with the main and jib sheets being held and ready to be released at a moments notice should the boat become overpowered.  As it turned out there was not a moment of anxiety and she handled the conditions beautifully just depressing the leeward bow initially and then lifting as dynamic lift from the hull took over pulling the apparent wind forward. We carried out several gybes as we headed down the Bay finally pulling up in the lee of the warship that is being fitted out at Point Gellibrand to drop our jib and mainsail before cruising up the river backing Peccadillo into her berth and tying off.  Overall on the trip we motored for around 30 hours some of that time the wind was up enough to usefully motorsail.  We did not have to take any reefs in the main but wound the jib in once on it's furler to make the motion more comfortable for the crew.  No need to worry about Charles as he is nearly immune to seasickness which is a handy gift to have.

Thanks to Charles for the opportunity to come along on the trip it was brilliant and to my fellow crew members Rick, Rusty and Rex for being patient with me when I was sick and helping me learn a bit more about sailing offshore on Peccadillo.

And a video of Peccadillo cranking along with Charles at the helm on our way through Port Phillip Bay to the berth at Pier 34:


Posted by Owen Corley McKenzie at 00:36