This design by Andy McCulloch was an evolution of the "Ghost Train" 2 metre design.  It exhibits good float buoyancy and is supplied as just a basic lines/sail plan and sections.  It also gives planforms for the rudder, daggerboard and a guide as to the shape and size of the beams.  My approach will be to build the hulls in halves and make a mold to suit.  My initial thoughts are to build the platform in carbon to minimise weight and maximise stiffness.  It should be an interesting project and I'll post up pics as I progress.

A .pdf of Andy's designs and the development of Mini40 and 2 metre trimarans is at this address.

My motivation with starting this project is I have some excellent sailing water nearby and find myself not particularly interested in what is being sailed by the local RC yacht group.  At present I'm constructing hull plugs to take a mold off.

19/1/2013
I've made some progress on constructing a hull plug for the floats.  I'm building the hulls in halves as noted above split vertically.  My first effort at a plug is quite rough and I intend to approach the next a bit differently but it will be adequate.

I've cast the first hull side into a female mold using several layers of csm mat and epoxy resin.  It would be ok to use polyester resin in this application as well but I have so much epoxy lying around It made sense to use it.  I've left the ends of the mold open and will insert and tab in bow end and transom along with half internal bulkheads when I layup the carbon fibre in the mold. 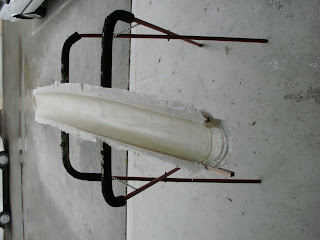 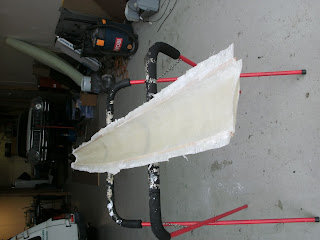 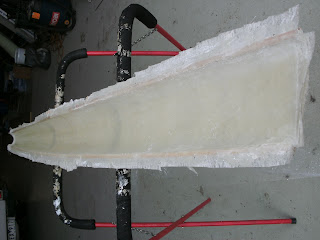 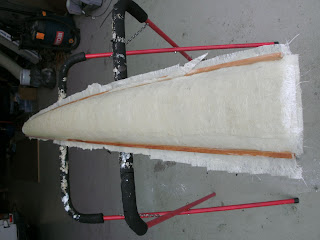 20/4/2013
I've set up the float mold stations for the other float side on the strongback and roughly cut the foam to shape I'll follow up with a multipurpose plaster filler and fair it off.  I use the expanding type foam in spray packs to form the mold if you were using a polyester resin to make the mold you would have to paint the foam with a styrene resistant paint as it would dissolve on contact.  In my case I'm using epoxy which does not effect the spray foam. 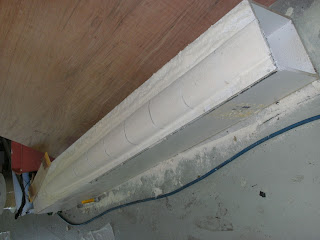 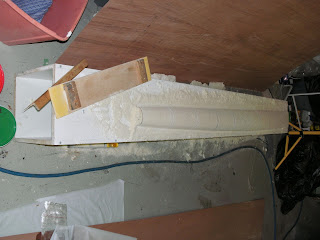 28/10/2013
I made the female mold for the second float hull side over the weekend and pulled it off the plug today. It was generally a much better result I waxed the plug this time rather than just spraying with release compound and it came off much more easily. I'm going to cast a polyester plug from these molds to check their accuracy and symmetry they look pretty good but with the initial plug being hand faired it's hard to tell. 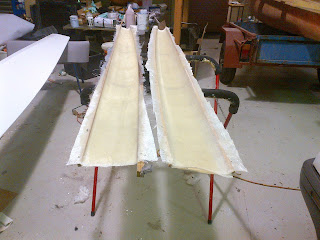 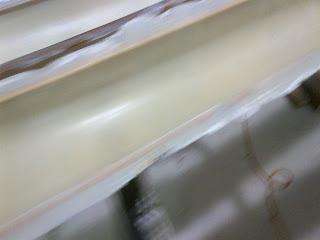 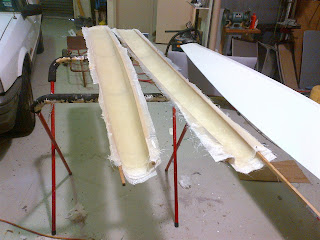 12/1/2014
I cast a couple of test half hulls out of the molds to check fairness and symmetry.  Both requirements appear to be within acceptable limits.  I just used some fiberglass chopped strand mat and cloth for this test run.  The final layup will be done in carbon fibre. 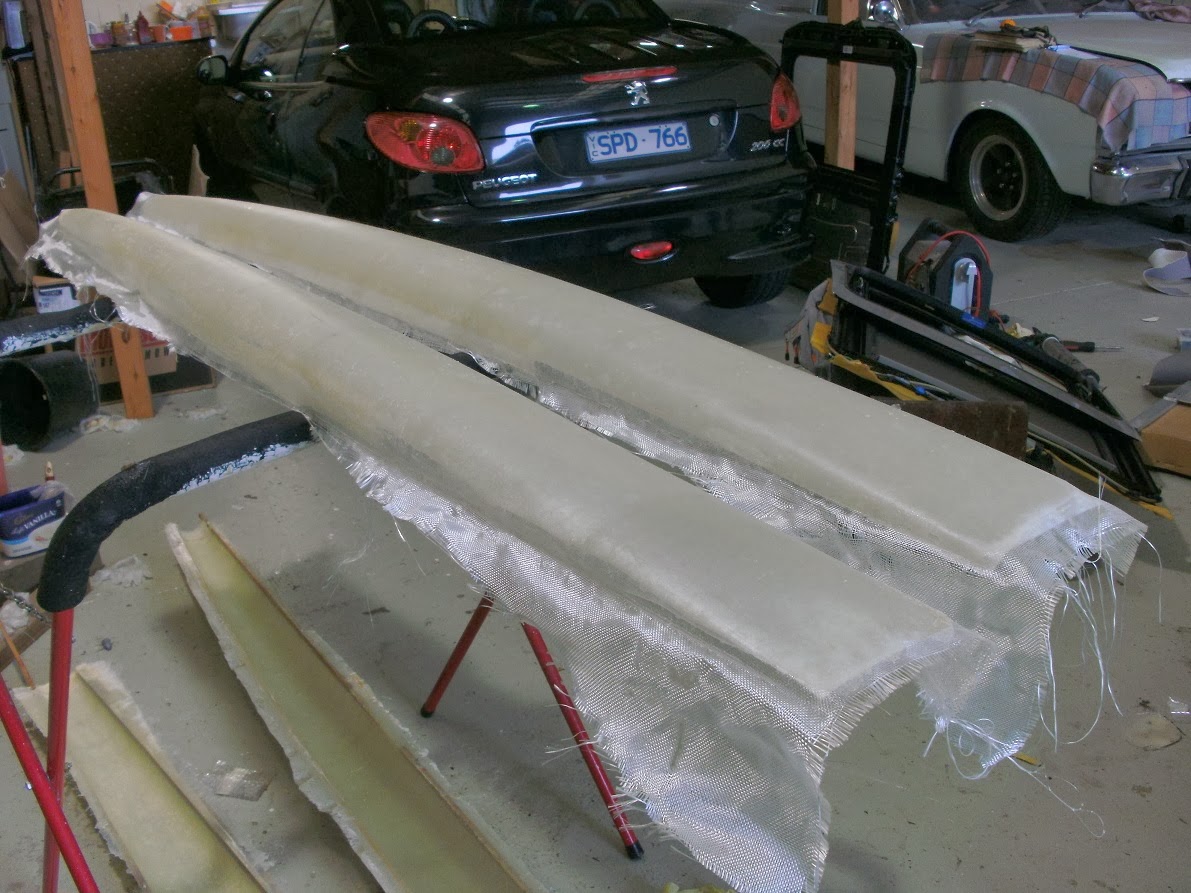 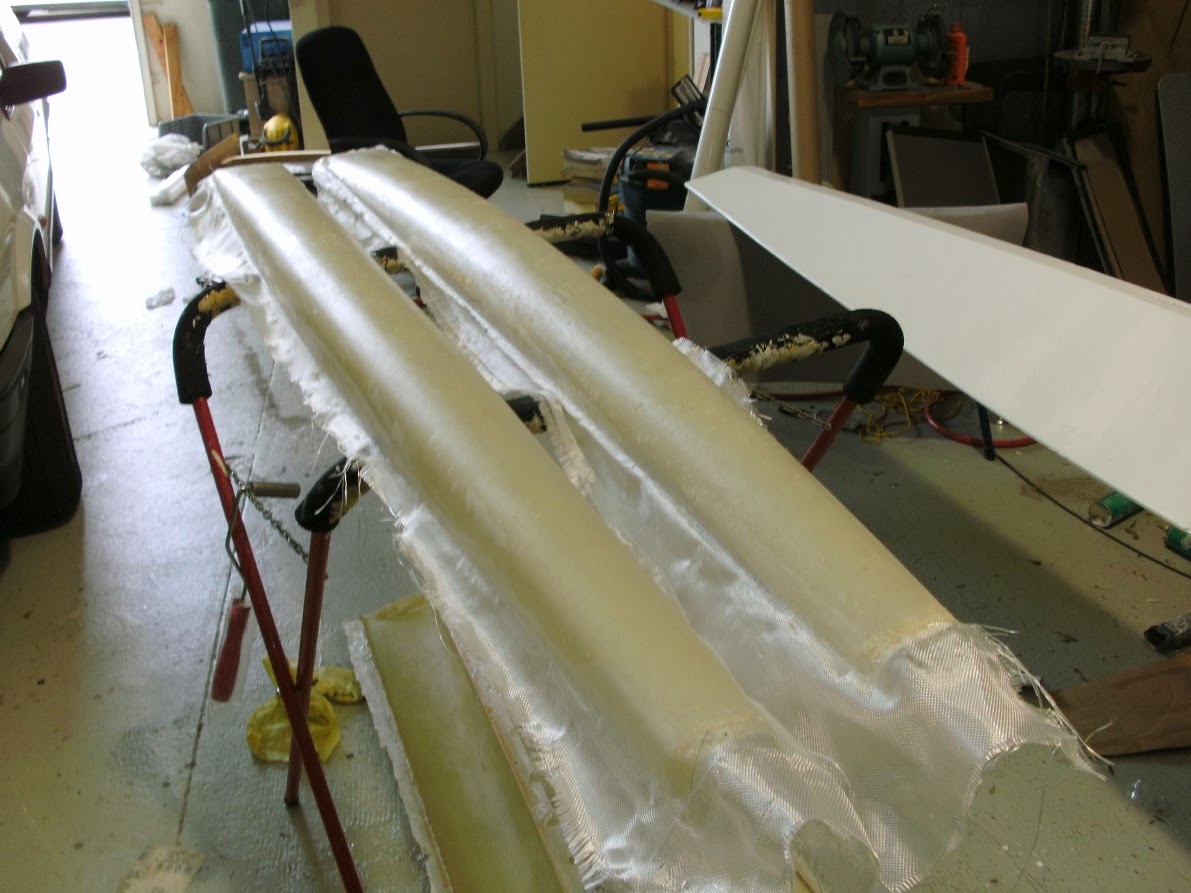 5/1/2015
As kind of a New Years Resolution it's my aim to get this project completed before the end of 2015.  I did a little work on the beam shapes as lifted from the plan.  I'm a little pedantic about fair curves and have always found value in lofting up plans particularly in cases where there isn't a lot of detail.  In this case I found the beams to be in tolerable agreement to the plans but a little out in places at full scale.  An alternative approach if you didn't want to loft the beam shapes from the baseline would be to blow the plan section up 400% and run a fairing batten over the beams to correct their curve. 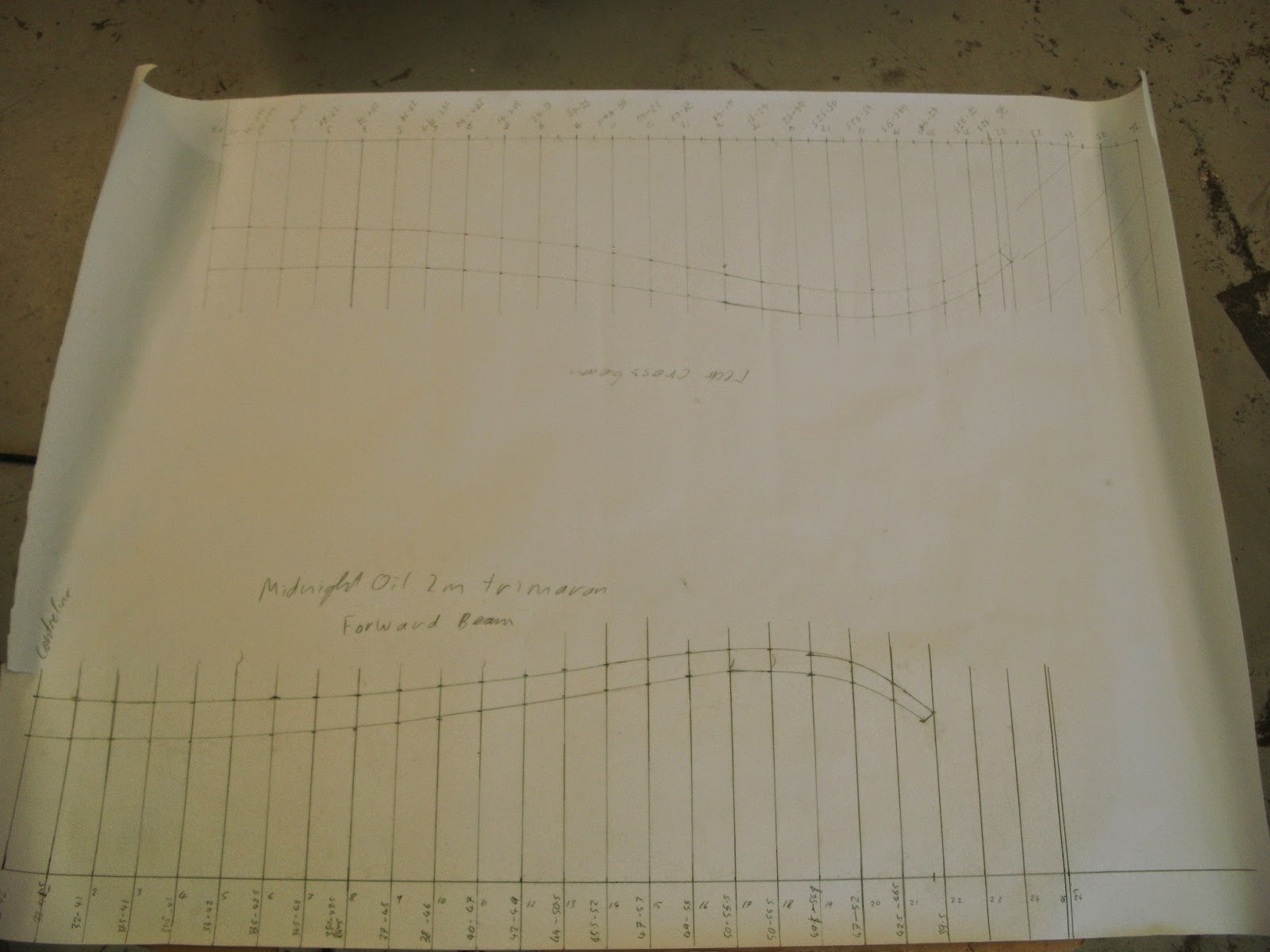