The new Macif trimaran to be skippered by Francois Gabart is coming together at the CDK Technologies construction facility.


Posted by Owen Corley McKenzie at 22:12 No comments:

From the latest update by Corsair:

http://sail.corsairmarine.com/update-3-on-pulse-600-development
With the hull, beam and float moulds all complete, the attention is now on the deck mould as the last major moulding to be completed before the first product can be produced. Here are some recent photos and insight into the current developments:

To make the deck mould, we first have to make the male plug. We do this using a series of CNC cut parts, which we slot into the hull shape before finishing with a filling material which is then sanded back by hand. We do this on a hull part so that we can be absolutely sure the hull and deck join aligns 100% every time as the parts themselves are made completely separately.

Posted by Owen Corley McKenzie at 21:49 No comments:

The crew at Rapido trimarans are making solid progress on their construction of tooling for their new Rapido 60 trimaran:

Posted by Owen Corley McKenzie at 18:40 No comments:

From the following press release on the Great Cup website:

Representing the state-of-the-art in catamaran design, the GC32 is attracting considerable interest due to its conceptual similarity to the AC72 and AC62 foiling catamarans pioneered in the America’s Cup. However as the GC32s are smaller one designs with soft sail rigs, they provide both professional teams and private owners with the opportunity to experience airborne catamaran racing and all the excitement of the larger AC catamarans, but on a much more modest budget and on boats that are far easier to handle while still having the potential to achieve top speeds approaching 40 knots. 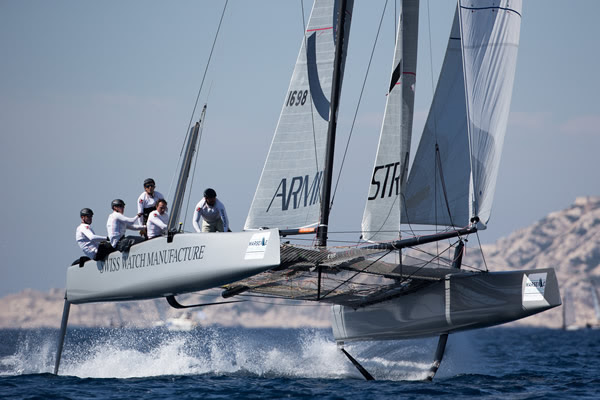 Posted by Owen Corley McKenzie at 21:48 No comments:

Route du Rhum veteran Anne Caseneuve has a lead of 650nm over her nearest competitors in the Rhum classification on her 52' trimaran ANEO.  With about 80nm to go she will soon move into the fluky wind shadow of the island of Guadaloupe:

You can follow the progress of the competitors on the excellent tracker which is here:

Posted by Owen Corley McKenzie at 21:15 No comments:

Ian Farrier has posted some interesting updates on the F-33 trimaran which is being built at Multihulls Direct in the Phillipineson f-boat.com


Posted by Owen Corley McKenzie at 17:11 No comments:

A number of updates on the Route du Rhum website with Erwan Le Roux taking first in the class on FenetreA Cardinal:

Lalou Roucayrol came in second on the Multi50 Arkema:

Gilles Lamire on Rennes Metropole St Malo Agglomeration came in third with the Multi50 Actual of Yves Le Blevec nipping at his heels.

Yves Le Blevec was forced to make a technical stop in Cascais to repair his wind sensor instruments which left him playing catch up for the rest of the race:

http://www.routedurhum.com/en/s03_actualites/s03p02_detail_actualite.php?actu=943
Posted by Owen Corley McKenzie at 07:06 No comments:

Posted by Owen Corley McKenzie at 09:21 No comments:

From the following article on the Route du Rhum website:

Thirty two years after the first of his seven attempts, French ocean racing star Loick Peyron won the mythical Route du Rhum-Destination Guadeloupe this Monday morning (TU) when he crossed the finish line of the solo race from Saint-Malo France to Pointe-a-Pitre at 04:08:32 TU/05:08:32 CET/00:08:32 local

His elapsed time is a new outright record for the course passage which was first raced in 1982, breaking the 2006 reference time set by Lionel Lemonchois (7 days 17 hours and 9 mInutes) by 2hrs 10mins 34secs.

Looking relaxed and on good form physically, Peyron acknowledged, pledging to be back in four years time on the little yellow boat:

Loick Peyron on BPVII is approaching the finish with about 39nm to go and it appears he will improve on the outright record time for the race.  Yann Guichard is in second place on Spindrift 2 and well behind (over 200nm now).  Sebastian Josse has moved up into third place with Lionel Lemonchois dropping back to fourth.

In the Multi50's Erwan Le Roux on FenetreA Cardinal is holding off Lalou Roucayrol on Arkema who is in second place for now but it's close.  Third place is held by Gilles Lamire on Rennes Metropole St Malo Agglomeration.

In the Rhum class Anne Caseneuve on the trimaran ANEO has moved into the lead and extending away the canting keel monohull being skippered by Andrea Mura Vento Di Sardegna.
Posted by Owen Corley McKenzie at 10:15 No comments:

Route du Rhum update, Loick still ahead of the pack in the Ultimes

Loick Peyron (BPVII) still has a solid lead over Yann Guichard (Spindrift2) in the Ultimes.  Lionel Lemonchois has consolidated his position in third.

In the Multi50's Lalou Roucayrol on Arkema has been overtaken by Erwan Le Roux on FenetreA Cardinal with Gilles Lamire on Rennes Metropole St Malo Agglomeration moving into third, Yves Le Blevec on Actual well behind after the technical stop at Cascais.

In the Rhum class Anne Caseneuve on the trimaran ANEO has closed the gap a little on Andrea Mura on Vento di Sardegna.

and an impressive video from Prince de Bretagne Maxi 80 sailing at about 35 knots.

Loick is doing well out the front of the fleet, BPVII is a more wieldy boat from a solo perspective than Spindrift 2 but if Yann can get some more stable weather he might be able to exploit the power of the boat a little better. The big story for me is how well Sebastian Josse is doing on the modified MOD70 Edmond de Rothschild he is punching well above his weight to hold onto a solid third in the Ultime class.

In the Multi50's some strategic positioning by Lalou Roucayrol on Arkema has seen him take the lead. Lalou's early strategy saw him go for a more Westerly route initially and has given him sea room and kept him out of the worst seastates that the boats went inshore had to deal with. Team Actual has to drop into Cascais for repairs to their wind instruments which will allow FenetreA Cardinal to sneak away into a more solid second place.

The Route du Rhum news coverage and tracker is excellent so I will just give a summary each day and wont attempt to repost all the news here best to just visit the Route du Rhum website for full updates:

Currently Loick Peyron on Banque Populaire VII is leading the field in the Route du Rhum.

Thomas Coville on Sodebo Ultime has been forced to retire after suffering float and main hull damage after a collision with a cargo ship.  Skipper is uninjured and coaxing the boat to the Port of Roscoff:

a rough bing translate of the article here:

Sunday, November 2 at 11: 30 pm, the Cross has informed the direction of the Route du Rhum race - Destination Guadeloupe than Sodebo Ultim' had collided with a cargo ship and its skipper was unharmed. The trimaran was almost out of the rail and sailed under 3 reefs and ORC, progressing at a speed of 15/18 knots in Active grains by 30 knots of wind Southwest.
In the clash, the trimaran has lost forward of the starboard float until the link arm. The central hull seems to have been also damaged at the front. Sodebo Ultim' is headed for the port of Roscoff, crosswind, under reduced sail, supported on the port float. Currently forward in a dozen nodes. In approaching the coast of Brittany, the wind will ease and the sea is mellowing. Its technical team which was on standby in Brest will travel at night to Roscoff where the trimaran is expected in the morning.

More bad news with the Multi50 Maitre Jacques being forced to retire with starboard float damage:

To 11 pm this Sunday, the starboard float of Maître Jacques broke. He then was in 4th position of the Route du Rhum - Destination Guadeloupe, in the category of Multi 50. Loïc Féquet was about to wrap the tip of Brittany, and was sailing near the coast. It is not in danger, there is no risk of Dismasting, but the boat is not operating.

A tug of the SNSM comes from sailing to tow it to the nearest port, it should be on area about 2 o'clock in the morning.

Loïc Féquet, skipper of the Multi 50 master Jacques: "there were 25-28 knots and seas, but I wasn't to attack, on the contrary! I was under two ris staysail. I hit nothing. It broke exactly at the same place as last year *, but this time, the float is brand new... »

The master Jacques skipper has secured his boat. It is only 7 miles (13 km) sides and derivative at two knots approximately to the North. Loïc is inside his boat while awaiting relief.

Posted by Owen Corley McKenzie at 13:08 No comments:

The Route du Rhum is underway with competitors being faced with tough conditions for the first 48 hours at least.  The Ultimes are likely to sail through the worst of the conditions far more quickly than the rest of the fleet and reach more favourable conditions to the South.

The tracker is active on the Route du Rhum website:

A highlights video of the start is here:

Vincent Beauvarlet attempts to cross the Atlantic on a Multi23 trimaran

Vincent Beauvarlet is attempting to sail across the Atlantic in a Multi23 trimaran St Malo to Point A Pitre.  You can read more on the attempt at Vincent's website:

Posted by Owen Corley McKenzie at 20:19 No comments:

Yvan Bourgnon has managed to secure sufficient crowd funding to continue on his beach cat circumnavigation.  He is going to rebuild the remains of his wrecked boat in Sri Lanka and continue on to France to complete his journey. 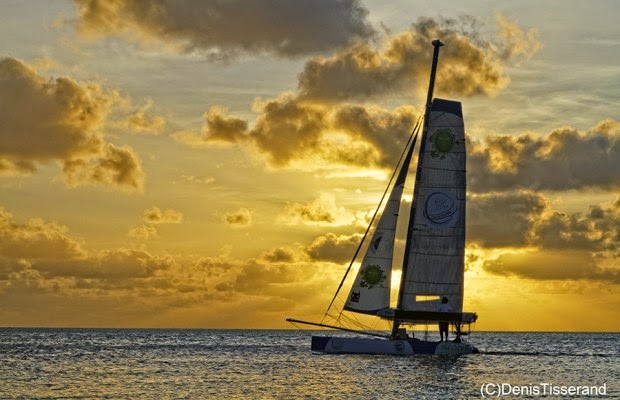 Posted by Owen Corley McKenzie at 07:07 No comments: