Hydroptere in action with aerial drone footage, on water and onboard views

Posted by Owen Corley McKenzie at 20:25 No comments:

The Seb Josse-skippered foiler sets a new record in the Tour de Belle Ile
From the following article on the Daily sail posted on Saturday May 9th 2015, Author: James Boyd, Location: France
http://www.thedailysail.com/inshore/15/67994/0/tour-de-belle-ile-2015-race-report

France's equivalent to our own Round the Island Race - the Tour de Belle-Ile set sail yesterday at 10:00 local from the Baie de Quiberon, with almost 500 boats, taking on the annual lap of Belle-Ile.

This race, the eighth that has been held, was won on the water by the foil-born Multi 70 Groupe Edmond de Rothschild, which overtook her less optimised sisterships Oman Sail and Paprec Recyclage. Skipper Sébastien Josse and his crew managed to establish a new race record for the course, while in the monohulls it was Paul Meilhat's new IMOCA 60 SMA (ex-MACIF) that was first home.

Posted by Owen Corley McKenzie at 05:42 No comments:

From the following article by the editor, Sailing Scuttlebutt:

The six-man crew, skippered by Sidney Gavignet, and including Omani sailors Fahad Al Hasni, Yasser Al Rahbi and Sami Al Shukaili, key members of last year’s Round Britain and Ireland world record setting team, plus Spain’s Alex Pella and French multihull veteran Jean Baptiste Levailland, set a new Round Ireland, non-stop, crewed record in the MOD 70 Musandam-Oman Sail. The team crossed the finish line beneath the Kish Lighthouse off Dublin Bay just before 1000 UTC (May 6) having started their record attempt at 1704 UTC on Monday, May 4.

They needed to be back by 1500 to take the record but their breakneck speeds down the west coast of Ireland, at one stage reaching 38 knots, meant they were finished well before that, some three hours and 50 minutes faster than the record of 44 hours 42 minutes held by Steve Fossett set in September 1993 aboard his 60ft trimaran Lakota. The record will remain unofficial until World Record Sailing Speed Council ratification.


Posted by Owen Corley McKenzie at 09:41 No comments:

A new trimaran design by Tim Clissold (TC601) which is designed to use F18 beach cat hulls as floats and provide some useful volume in the main hull for racing and daysailing:

and the build blog for the new design hull #1 to be built in the UK: 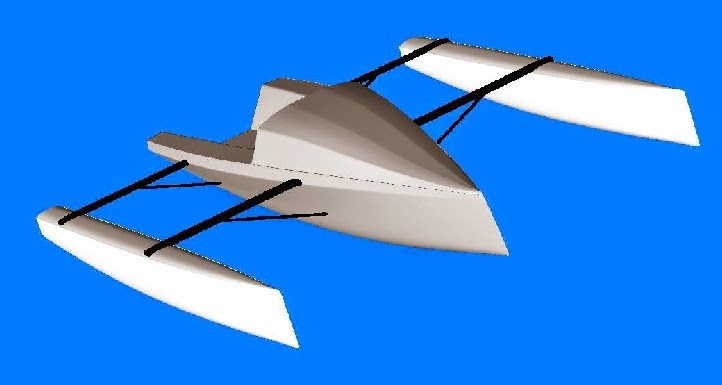 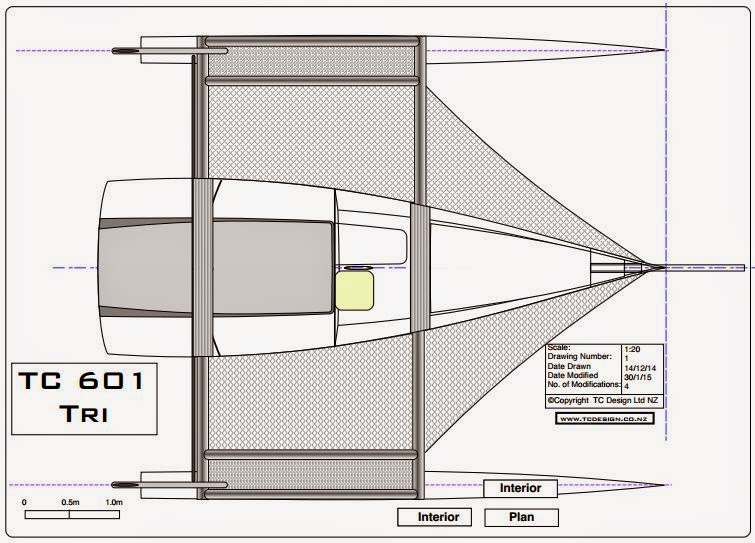 Posted by Owen Corley McKenzie at 11:16 No comments: