NEWPORT, R.I. (July 5, 2015) – With 2,800 miles to sail and just two boats on the starting line, a conservative start would seem like the smart play. But for the 63-foot trimaran Paradox, owned by Peter Aschenbrenner and skippered by Jeff Mearing, the start of the multihull class in the Transatlantic Race 2015 offered up a wondrous opportunity to throw a little mud in the eye of Lloyd Thornburg’s Phaedo3, the 70-foot MOD 70 trimaran that is the odds-on favorite to take overall line honors in the race. It was too good to pass up, no matter what the overall risk-reward analysis might say.

The starboard end of the starting line was heavily favored due to the straight shot it provided out the channel, so both boats set up off the Jamestown shore for a long timed run on starboard tack. Paradox led into the starting area off the Castle Hill Lighthouse and, with both boats a few seconds late, seemed to be content to cross the line with a slight lead. At the last second, however, Aschenbrenner hardened up and cut off the path of the hard-charging Phaedo3, forcing the larger boat to spin head to wind on the wrong side of the starting line and turn an achingly slow 360, before setting off in pursuit of its rival. 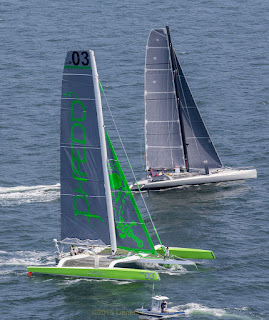 For a race of this extreme distance, such an advantage at the outset means little. To wit, by 3:30 p.m., 90 minutes into the race, Phaedo3 had rolled over the top of Paradox and was scorching south of Martha’s Vineyard on an east-southeast heading at 30 knots. Paradox wasn’t exactly plodding along, hitting over 22 knots according to the tracker, but was quickly losing touch with the competition. Hopefully the early win helped ease the pain of watching Phaedo3 disappear over the horizon.

Anticipation for today’s second start—the final act of the fortnight of U.S.-based activity for the Transatlantic Race—has been building since last summer when the news broke that two new super maxis – the 100-foot Comanche and Rambler 88 – would be competing in the race. While both skippers have downplayed the duel—the boats have different design briefs and there is a 12-foot difference in overall length, in a sport where longer is often faster—the sailing public hasn’t let go of the “which one is faster” debate. It doesn’t hurt that the two skippers—Ken Read, who is skippering Comanche for owners Jim Clark and Kristy Hinze-Clark, and George David, the owner/skipper of Rambler 88—were once crewmates on David’s IMS 50 Idler, which competed as a part of the American team in the 1999 Admiral’s Cup.

Whether despite this or because of it, the final start of the Transatlantic Race 2015 was more true to expectations for such an event. Both boats maneuvered significantly through the pre-start, probing for an advantage. But with neither boat providing an opening, the afterguards of each boat were content to blast across the line in sync, Comanche to leeward and slightly ahead. As with the trimarans, the speeds jumped significantly once the boats passed the R4 channel marker south of Brenton Reef and were able bear off and ease the sheets. At press time, Comanche had pulled out to approximately a 1.3-mile lead over Rambler 88, with both boats recording speeds in the low 20s.

No matter where they stand relative to their respective competitors, sailors on all four boats have to be extremely pleased with the weather, which provided them with ideal reaching conditions for the escape from Newport. Whether it lasts, however, is a significant question. In the immediate future it appears to be some lighter winds. Any advantage or disadvantage at the start will be quickly forgotten if any of the boats struggle to push through to the next band of breeze.

The tracker is here:

And a video of the start from the Phaedo team: