Yvan has completed his journey:

Challenge / around the world in sport catamaran for Yvan Bourgnon, arrived at Ouistreham! (Images)

After a course of 55 000 km around the planet on his small sport catamaran, the adventure of Yvan Bourgnon ended yesterday after 20 months of navigation. Party in October 2013 of Sables D'olonne, after beaching, two capsizing, and thousands of hours spent at the tiller, the sailor crossed the line yesterday in Ouistreham, marking the end of his journey on June 23, 2015.

Challenge Atlantis Television, the first round of the world uninhabitable sailing
Yvan Bourgnon completed its World Tour! He arrived yesterday at 1 pm at the port of Ouistreham Riva Bella.

Back on the adventure
October 5, 2013, departure from les Sables D'olonne. November 2013, first storm with more than 60 knots of wind and first capsize.

February 2014, the sailor is the Panama canal with the ship dismantled, put on the deck of a sailboat.

August 2014, after 19 days at sea in full monsoon, Yvan Bourgnon ran aground at night on the coast of Sri Lanka. A part of the boat is destroyed.

March 2015, after repairing his boat on the place of his grounding, he resumed his challenge. 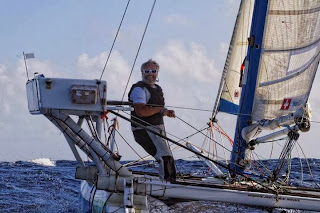 Posted by Owen Corley McKenzie at 20:48