Phaedo have finished the Trans Atlantic race and took first place in the open division.  Paradox are still at sea with about 254 nm to go.  They are about 30nm astern of Rambler 88.

Thornburg, co-skipper Brian Thompson, and the rest of the crew’s elapsed time of 7 days, 2 hours, 4 minutes, 9 seconds was well ahead of the other fast boats that started in Newport, Rhode Island last Sunday including Jim Clark’s 100-foot sled Comanche, George David’s Rambler 88, and Peter Aschenbrenner’s 63-foot trimaran Paradox. And since Phaedo3 was able to average speeds in the high 20’s once the wind filled in, they’re the 7th boat to finish overall and they came in well ahead the majority of the fleet that started a week before they did.

Phaedo3 continues to raise the bar of what’s possible in offshore racing and the numbers tell the story:

But this is only the beginning. Thornburg, Thompson, and several other Phaedo3 crew and going to keep racing (to Los Angeles for start of the Transpac) once boat docks in Cowes early tomorrow morning.

Thornburg and company have thrown the high performance multi-hull gauntlet down and hope to see more fast multihulls in future offshore races and they are putting their money where their mouths are. They’ll be racing aboard Thornburg’s original Gunboat 66 Phaedo as he goes for a rare Owner/Driver offshore double in the Transpac next week. 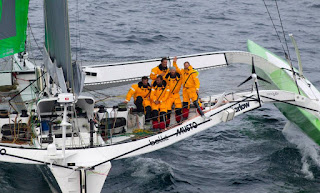 Posted by Owen Corley McKenzie at 11:59