The Lending Club 2 team have officially withdrawn from the Transpac race in order to catch a more suitable weather window for their LA to Honolulu attempt.  The outright record which is currently held by Olivier de Kersauson on Geronimo at 4d 19h 31m 37s is separate to the Transpac Race record which is held by the 86′ maxi cat Explorer of with a time of 5 Days, 9 hours, 18 minutes and 26 seconds 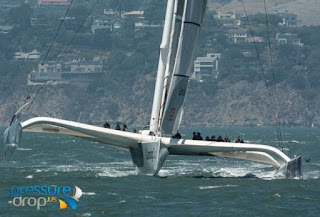 Posted by Owen Corley McKenzie at 21:02