Several articles on Sail-World on the ETNZ America's Cup team with a nod to Luna Rossa.

Luna Rossa and ETNZ sailing in the Hauraki Gulf:

Another milestone in the 34th America's Cup occurred today, November 19,2012 with two AC72's sailing on the Hauraki Gulf for the first time.

For much of the session Luna Rossa confined herself to being well offshore, while Emirates Team NZ was much closer to the Takapuna shore. 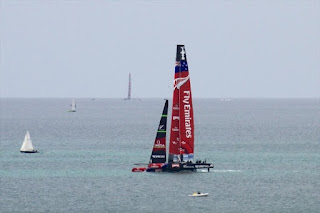 It was the time a squall hit them on Auckland Harbour just as they were about to round North Head.

'We had been in squalls before but never when we either had to tack the boat or commit to bearing away. We were in close to 30 knots true wind speed.

'It’s the only time I remember when we thought ‘uh, uh got a bit on here’ but other than that life with the AC72 has been just fine.'

The strongest breeze they’ve had at the mast head is about 33 knots with a good 25 to 28 knots on the water at times. 'We have had 60 knots of apparent wind across the deck so there can be a lot of wind noise which affects communications. That’s a key area to get right. 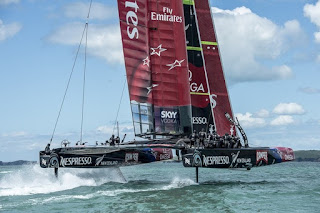 ETNZ out blasting in the Hauraki Gulf

Emirates Team NZ was out sailing again on the Hauraki Gulf on Friday, ahead of an advancing front which hammered Auckland over the weekend.

Team photographer, Chris Cameron, was on hand to capture the action. 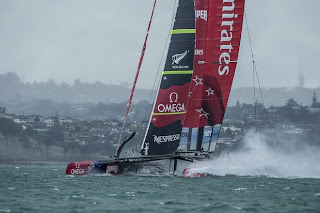 Posted by Owen Corley McKenzie at 03:30