thanks to sail-world for this article

It was the first day of sailing for the Italian America's Cup Challenger starting in light winds which slowly increased top around 15 knots.

The AC72 sailed with only one foil, which was a little limiting however from an image from a team member's Facebook page it would seem that Luna Rossa were able to get foiling - an impressive feat in the circumstances. Other teams have been able to foil on their fourth day of sailing, which has become a benchmark. 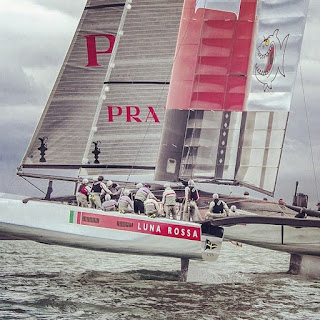 Posted by Owen Corley McKenzie at 01:56