Thanks to Voiles et Voilliers rough translate with bing!  This explains the "interesting" English in places but the general message is still intact.

Launched late October before the Multiplast (valves), the new Prince de Bretagne is dedicated to the next Route du Rhum. And it is aboard this 80' VPLP that Lionel Lemonchois seeks a third victory in the transat!Photo @ Jean-Marie Liot (IPPD)It's official: the next Route du Rhum 2014 will again host 'Ultimate' multihulls (over 60 feet), and it is expected that the former contenders (Groupama 3, Sodebo, Idec, Gitana 11...) be present once again - with no doubt, the MOD70.

The new Prince de Bretagne, 80 feet long, intended for Lionel Lemonchois, already double winner of the event (ORMA 60 and Multi50), fits into this category with the ambition to win by scrubing Gitana 11, too fickle to a lonely defects, and filling some of the deficits facing the 100 to 110 feet, little affected by the State of the sea beneath two metres of hollow.
Lionel Lemonchois explained his approach while Vincent Lauriot-Prévost and Philibert Chenais address the architectural evolution of the multihulls of the 'Ultimate' category

v & v.com: this new Prince de Bretagne is so totally dedicated to the Route du Rhum 2014?
L.L.: There will be of course other races and other records in sight. One can imagine that there will be an 'Ultimate' class at the next Transat Jacques Vabre 2013. Prince of Brittany has also initiated a round of Europe (Princes Highway) for next season and this seems to exist. There will be many events in crew before the 2014 rum, which remains the ultimate goal!

v & v.com: Groupama 3 had dominated the last edition. This new trimaran is capable to beat at the next?
L.L.: Honestly, I don't know yet. What is certain, is that Prince de Bretagne will be easier to handle! Anyway, we did not have the financial ability to acquire Groupama 3... The project that I proposed is consistent with the means of my partners.

v & v.com:This project was already pending at the last edition!
L.L.: I had this project, but Gitana 11 does not match what I was considering. By choosing the ORMA Sodeboex-trimaran, I left with a widest possible multihull (18.20 meters), since the idea was to extend the maximum. Remains of the original ship, two link arms, derivatives, the foils, the central rudder, mast, boom, part of the hardware...

v & v.com:What is new on Prince de Bretagne ?
L.L.: The central hull, floats and their rudders, a suitable set of sails. Has been modified a little rigging, chainplates are a little more advanced, the front triangle is larger, the boom is no longer on the mast.
With the 80-foot Prince of Brittany, for Lionel Lemonchois, the VPLP architects have sought both to bananer hulls and drawing more elliptical floats, a bit like the MOD70.Photo @ Jean-Marie Liot (IPPD)

v & v.com: That is what has defined the final length?
L.L.: My idea was to have a possible long boat. Because it is healthier and easier single-handed. While retaining the same effort, IE by not significantly increasing the weight.

v & v.com:The program after this water?
L.L.: Bring back the trimaran to our base of Lorient Finally, quell, test. Then is to string together two lounge chairs to the West Indies with a few races at the Caribbean. Starting early in the year for a mid-March return. As a crew, but I could bring Prince de Bretagne solo... Is forbidden to nothing in terms of record.

v & v.com:What comparison against Sodebo, the giant trimaran Thomas Coville and compared to the 60 feet of origin?
L.L.: Sodebo is longer by 20 feet (see table below), but one is lighter by almost half (7.5 tonnes against 13)! In fact, the initial weight of 300 to 400 kilos (to validate the launch) was increased with about 15 additional square metres and 4 metres more at the close. We have not retained the hydraulic system, which added 200 pounds: so there is no tilting mast because the polar were more favorable for relief.

v & v.com:What are the strong points of Prince de Bretagne ?
L.L.: Its easy handling. But as Prince de Bretagne is light for its size, I think that there are many conditions where there should be at least as, or even better than a 12-ton trimaran and more! And then, the Route du Rhum is a singlehanded race: the scenario is never written in advance... What I like in this project, it is also to return to the source, to the origins of multihull races where all the sailors of the 1980s invented, according to their means and their ideas, the boats they wanted.

v & v.com:, What about the Prince de Bretagne Multi50?
L.L.: It is in Lorient, in perfect state of navigation. It is for sale, but if this is not done, it will run in all ways yet. Multi50 class is dynamic as Lalou Roucayrol will put his new trimaran in the water soon. 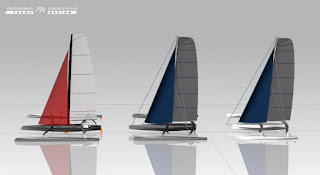 Evolution of the three trimarans VPLP dedicated to the Route du Rhum
Prince de Bretagne (left) looks more like a "stretched" as Gitana 11 version ORMA trimaran Rhum 2010 (in the Center). Gitana 11 version ORMA (right) won the Route du Rhum 2006 at the hands of... Lionel Lemonchois!Document @ VPLPThis comparison shows that the new Prince de Bretagne is very similar to Gitana 11 but with a less important twice higher, although righting moment than that of Groupama 3. But the last winner of the Route du Rhum is proportionately much less canvas. The confrontation with the MOD70 promises to be thrilling in the medium wind...Photo @ Vplp


v & v.com: Vincent Lauriot-Prévost and Philibert Chenais, can you explain the concept of the new Prince de Bretagne ?
V.L.P. & BW: The ex -Sodebo 60 feet was sized structurally for a righting moment: he had to reconcile the largest possible size with a similar weight. We thus arrived at 24 metres by slightly increasing the wing.

v & v.com:What changes have been made on the platform?
V.L.P. & BW: The arms were excluded in longitudinal 4 m (a contrario of Gitana 11), to reduce the efforts of bending the bow of the central hull and floats. The boat should be steeper structurally. These are the foils of origin (ten years), but they were very advanced: Lionel prefers a boat that pitch up. However, Gitana 11 (ORMA, Rhum 2006 version) had little large floats in the back, allowing him to navigate prancing downwind. There, there is more support and the advance of the foils can find this behavior.

v & v.com:Towing are also very different!
V.L.P. & BW: We have developed the evolutions of the MOD70 with the goal of bananer hulls to pitch the boat alone. The floats are less strained than Groupama 3 or Banque Populaire. The idea is to increase the dynamic slenderness. And then, races Ocean, we went to sections of floats less u-shaped, more elliptical, to fully go into the sea. The MOD70 are already in this light to limit the dynamic shock.

v & v.com:Structurally, the concept of the egg has been replaced by the triangle...
V.L.P. & BW: The break at the livet has a structural meaning in mind Eiffel - the system of three beams with a bridge that is more flat to save the developed of plating and better out in waves. The width at the bridge to better position the hardware, but also to hold the float or the central hull in his lateral movement. It stops at the gunwale level can thus stabilize geometrically by a UD (one-way, Editor's note) rather than to call for a reinforced sandwich. It's a big evolution relative to the last ORMA trimarans that we have drawn.

v & v.com:The sail plan has also been significantly transformed!
V.L.P. & BW: Yes. Since the forward link arm has been advanced, the mast base is in the middle of the central hull. But all of the rigging has slightly advanced. As we distributed the same volume (identical displacement) on more in length, this causes more wetted surface: it had to increase the sail area in proportion to not be penalized in the small time.

v & v.com:If you could have entirely draw a new boat for the Route du Rhum 2014, it would have been very different?
V.L.P. & BW: Yes, but Prince de Bretagne is a very good compromise with existing parts. The average speed of Groupama 3 on the last Route du Rhum is a little more than 17 knots on the water - it is very accessible! Gitana 11 was too nervous, too flighty, too demanding for a loner. Prince de Bretagne is better suited to a Route du Rhum. And it is especially a boat at the hand of Lionel... 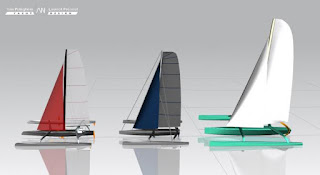 The new Prince de Bretagne (left) is positioned as an intermediate trimaran Gitana 11 (in the centre) and Groupama 3 (right). Without claiming to be the same potential in the breeze as the previous winner of the Route du Rhum 2010, Lionel Lemonchois multihulls will be significantly more reactive than G3 and handier than G11...Document @ VPLP
Posted by Owen Corley McKenzie at 18:11