From the following bymnews article

French naval defense group DCNS stops its support towards Hydroptere's oceanic program. Alain Thébault's hydrofoil trimaran, originally set to attempt the Transpac record this summer, had to post-pone her departure due to the absence of favorable weather windows. This new calendar doesn't meet with the group's expectations which does not have a market in the US.
Alain Thébault and his team thank DCNS whose support helped launch the 'flying boat' oceanic campaign. The team also acknowledges the work done by the group's engineers and by all those who have supported the project over the year.
"We are surprised and obviously disappointed but we remain hopeful. This is the first time a hydrofoiler attempts an ocean record. DCNS gave us the means to start the adventure and we will go all the way. The project demonstrated it can generate a great enthusiasm and we hope that this pioneering challenge, in which we strongly believe, will find new support in France or abroad", says Alain Thébault.
Supported by the Consul General of France in San Francisco, sailors Alain Thébault, Jacques Vincent, Jean Le Cam and Yves Parlier will create "Hydroptere Pacific", a Californian structure with the objective of encouraging potential American partners to be part of this adventure. 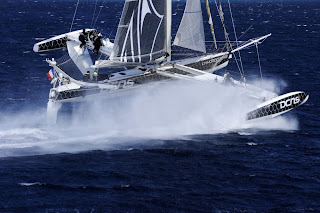 Posted by Owen Corley McKenzie at 05:29