everyone ok, minor damage and the boat has been righted and recovered without incident.  The crew even made it to the pontoon party for a beer later.  Have to keep your priorities right!

The Auckland chop caught Rodney and the team out on Wednesday Night. Looks like they were hankering after the old mono hull days as Ninja's mast became her keel. 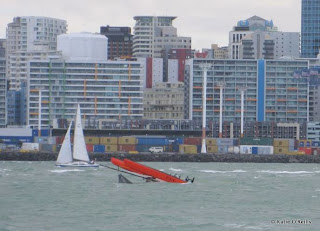 The conditions were not good with a 33 knot Westerly at Bean Rock and a 3.4 mtr tide coming up the harbour creating that nasty Auckland wind against tide chop.
Rodney reports that the bows were already under as a gust hit taking them over in a spectacular AC45 style pitchpole just past Princess Wharf. Punters on the wharf and the ferrys looked on in awe as their very own Americas Cup style racing unfolding right on their doorstep. 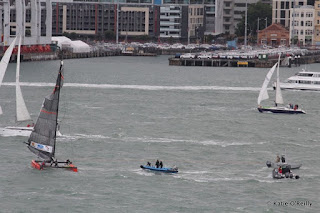 Katie O'Reilly was on her way home and saw all the action "Quite a drama and those guys must've been freezing in the water during the time it took them to right it, but I saw they were very well outfitted. I just thought the guys might like to see this event from a dry perspective." 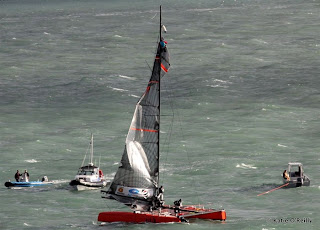 The forward planning is to be praised as all were wearing lifejackets, helmets and good wet weather gear. The one thing missing was the inflatable capsize capsule at the top of the mast as it is going through a redesign. Had it been there she could have continued with the race as she would not have inverted. What you see on the picture is a fender. 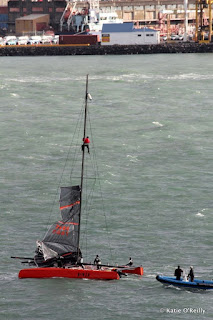 Team spirits were good with all the crew making it to the pontoon party for a well deserved beer.

Ninja is a big beach cat and is likewise designed to be retrievable too. This is why there was only minor damage to the main sail although next time the dagger boards will be secured to the boat. 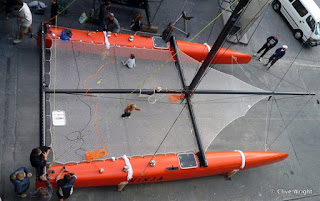 If anyone does happen to come across a nice carbon daggerboard drifting in the harbour please get in touch with us!
Thanks to Katie for the pictures.