From the following article by David Brookes on the Hobieclass.com website:

Member for the South Coast, Shelley Hancock, has announced that Huskisson, Jervis Bay, New South Wales, will welcome a record number of entrants for the world’s largest Hobie 16 World Championships, held from Friday 31 January to Saturday 15 February 2014. The Hobie 16 World Championships is the pinnacle competition for the largest and most popular catamaran class in the world.

More than 365 teams, comprising almost 500 competitors from 27 countries will battle it out during the 16-day sailing regatta on the idyllic waters of Jervis Bay.

A single class, multi-hull event, the regatta ensures a level playing field for competitors, where all will be sailing in identical Hobie catamarans.

“This is great news for our community, and we look forward to welcoming the competitors and visitors to our beautiful region for the 20th Hobie 16 World Championships,” Ms Hancock said. 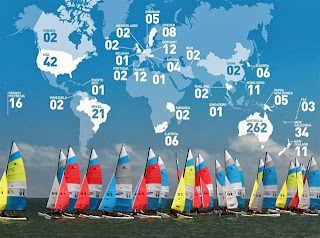 Posted by Owen Corley McKenzie at 15:49