From the following article (in French) on http://www.voile.princedebretagne/fr/

and the rough bing translate below:

After three days spent at the Paris boat show, the annual gathering of enthusiasts of water sports to discover what's new in the upcoming season and bringing near 785 exhibitors, 1 300 brands and over 240,000 visitors, Lionel Lemonchois regained its Lorient base to continue its preparation. These days, the skipper of the Maxi80 Prince of Britain and his team have thus finalized the last details of the installation of the video system of the edge then realized two outputs at sea, Tuesday and Friday, to validate all through tests in live with the SICA. These occasions, Norman has also carried out tests of its automatic pilot of "spare". Tests that should continue at the beginning of next week, at the same time to the installation of the wind turbine and the provisioning of the boat. As a result, the trimaran will be in the starting blocks of the Mauritian (record between Port-Louis, Morbihan and Port Louis in Mauritius) from next Friday. 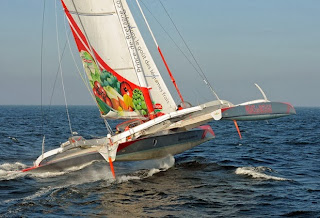 Posted by Owen Corley McKenzie at 07:56