From the following article:

The book is now available at online sellers and in bookstores.  More information on availability
One of the Greatest Comebacks in Sports
Millions of sailing enthusiasts and casual fans alike watched the 2013 America’s Cup in awe as ORACLE TEAM USA, trailing one point to New Zealand’s eight and on the brink of losing the trophy to the Challenger, came back to win eight straight match-point races to successfully defend the most famous trophy in sailing.

The 2013 America’s Cup was raced in 72-foot wingsailed catamarans at speeds of 40-50 miles per hour in San Francisco Bay. Designed and engineered by each team, these multihulls were unprecedented, using hydrofoils to race in close quarters around an inshore course, watched by tens of thousands of spectators. 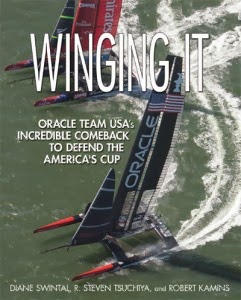 Posted by Owen Corley McKenzie at 18:13