A new press release from the IDEC media team, Francis Joyon to attempt the Grand Slam of records to hold the round the world, 24 hour record, Discovery Route and Transatlantic New York to Cape Lizard record.  The original article in French is linked below

and the rough English google translate below:

Already holds records solo round the world, the 24-hour clock and the Route Discovery, Francis Joyon will tackle this spring in the North Atlantic. If the bat, it would be the only sailor in the world to have achieved the Grand Slam record.


© JEAN MARIE LIOT / DPPI / IDEC
Aboard his maxi trimaran IDEC now available with foils - so even faster - Francis Joyon already has a track record monstrous succeeded around the world in only 57 days. Always alone, he traveled 668 miles last summer water (1237 km) in one day, hauling the record of 24 hours at the stunning average speed of 27.83 knots. Finally, recently, he broke his own record for the Discovery Route (Cadiz-San Salvador), in lowering more than a day with a time of 8 days, 16 hours, 7 minutes and 5 seconds. What is missing, then, Francis Joyon and his trimaran of 29 meters? The clock on the North Atlantic only. In the world of hunters records, whether crewed or solo records form the four Grand Slam absolute, the most prestigious being the order around the world, the Atlantic, and 24 hours Discovery Route. Francis Joyon has the opportunity this year to become the only sailor in the world to hold together these four legendary lap. Neither Ellen MacArthur nor Thomas Coville - its two biggest competitors in these exercises - have not seen this possibility one day before their bows. unheard But this quest only become a reality if the driver IDEC can beat this famous record between New York and the Lizard. A challenge very impressive when you consider that the current chrono - held by Thomas Coville aboard Sodebo - is 5 days, 19 hours, 29 minutes and 20 seconds. Nearly 21 knots average on the direct route of 2980 nautical miles long ... so not counting additional distances to swallow to keep trains circulating depressions in the top of the charts and on which to ride at full speed for hope a favorable outcome. A legendary record Francis Joyon walk in the footsteps of marine legend Charlie Barr, who had opened the year in 1905 aboard the famous schooner Atlantic (12 days, with 50 crew!) Eric Tabarly that, 80 years later, was down to 10 days aboard the trimaran Paul Ricard. Then it will be the crews Marc Pajot (Elf Aquitaine), Patrick Morvan (Jet Services 2), Loïc Caradec (Royale 2) Philippe Poupon (Fleury Michon VIII), Serge Madec (Jet Services V) Steve Fossett (Playstation) Bruno Peyron (Orange II) and closer to home Franck Cammas (Groupama 3) and Pascal Bidégorry (Banque Populaire V), which will each time, crew, save a few hours, a few days on this course legendary. Alone, Bruno Peyron (Explorer in 1987 and 1992), Florence Arthaud (Peter I), Laurent Bourgnon (Primagaz, 7 days in 1994) have been there too ... and already Francis Joyon, who beat the record for the first time in 2005 aboard the first trimaran IDEC (6 days and 4 hours) before Thomas Coville, three years later, not fall below 6 days. This course alone on the road of the great transatlantic liners, is a myth steeped in history, imaging marine legends. Those of Nantucket and the Grand Banks of Newfoundland around, storms and mysterious mists. The big red trimaran quietly waiting his time and a favorable weather window. It is possible from early May. As Joyon said: "There is no limit to dreams." Records of the North Atlantic Solitaire 1987: Bruno Peyron, catamaran Explorer, 11 days, 11 hours, 46 minutes and 36 seconds 1990: Florence Arthaud, Pierre trimaran 1 in 9 days, 21 hours and 42 minutes 1992: Bruno Peyron, catamaran Explorer, 9 days, 19 hours and 22 minutes 1994: Laurent Bourgnon, trimaran Primagaz in 7 days, 2 hours, 34 minutes and 42 seconds 2005: Francis Joyon, IDEC 1 in 6 days, 4 hours, 1 minute and 37 seconds 2008: Thomas Coville, Sodebo trimaran in 5 days, 19 hours, 29 minutes and 20 seconds 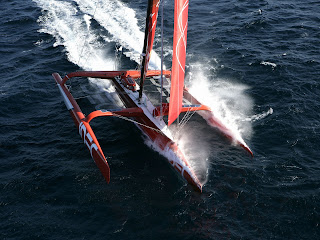 Posted by Owen Corley McKenzie at 21:12