From the following article on americascup.com by Stephen Barclay, CEO of the America's Cup Event Authority

In the old days, you needed a boat to go and watch an America’s Cup race. Now you can walk up to the edge of the race course. Of the slew of innovations brought in for this America’s Cup, bringing the racing in from the ocean has to be most popular.

Let’s first look back to why the AC World Series was established:
1. Proof of Concept: stadium racing and a live television broadcast that captures the audience;
2. More visibility for team and event sponsors; and
3. Create an annual competition to build anticipation and excitement for the once-every-four-yearly Louis Vuitton Cup and America’s Cup.

Regarding objective 1, the answer is a resounding “yes”, it has been worth it. The AC World Series has created memorable images of the crowds lining the shore and cheering like the fans at a football match. If you ask any of the sailors if they get a buzz when they hear the roar of the crowd, you will get a very vocal “yes”. 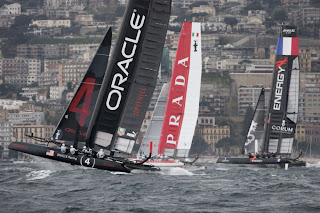 Posted by Owen Corley McKenzie at 14:02