From the following afloat.ie article

#roundirelandrecord – A 60-foot French international trimaran with Ireland's top offshore sailor Damian Foxall and an international crew on board is to attempt to break the Round Ireland speed record this week.
French sailor Sidney Gavignet will skipper Oman Sail, a MOD 70 that was last in Irish waters for the MOD70 European tour last September. As well as Foxall, Neal McDonald, Jean Francois Cuzon and Fahad Al Hasni are listed as crew.
The bid is sponsored by the Tourism ministry of Oman.

World Speed Sailing Record Commissioner Chris Moore, who is also the vice-commodore of Dublin Bay Sailing Club (DBSC) will officiate this latest attempt, possibly on March 20th but subject to weather. The plan, according to Moore, is to start and finish at the Kish lighthouse at the entrance to Dublin Bay using DBSC's new starting vessel Freebird. 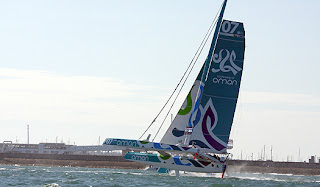 Posted by Owen Corley McKenzie at 13:07