From the following press release on the Extreme Sailing Series website:

- 20 knots of breeze with gusts over 25 sees the eight Extreme 40s hurtle around the Bay of Angels with hulls soaring and bows diving.
- Pushing the limits - SAP Extreme Sailing Team and ChinaSpirit narrowly avoid pitch-poling their Extreme 40s.
- Newcomers the first club ALL4ONE and ChinaSpirit teach the old hands some new tricks consistently pushing the front of the fleet.
- The Wave, Muscat stamp their authority with four race wins but McMillan admits “It is going to be really difficult to repeat a day like today”.
- Fleet braced for another day of hull flying action tomorrow, 4 October, with 25 knots on the forecast – watch it all live from 1600CEST www.extremesailingseries.com.

‘Extreme’ ‘on the edge’ and ‘intense’ was how the fleet of elite Extreme 40 sailors described an action packed opening day of racing at the Extreme Sailing Series™, Act 7 Nice presented by Land Rover. 20 knots of breeze with gusts of 25 knots and rolling two metre seas saw the eight Extreme 40s hurtle around the Bay of Angels with hulls soaring, bows diving and water spraying. The big breeze suited Leigh McMillan’s Omani team The Wave, Muscat who came out in empathetic style, winning four of the eight races to stamp an early authority on the Nice leaderboard. But everyone’s eyes were on the Danish SAP Extreme Sailing Team today, who skilfully managed to bring their Extreme 40 back from the brink of a pitch pole, but suffered race-ending damage in the process. 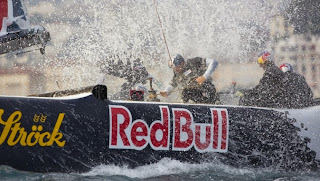 Posted by Owen Corley McKenzie at 08:40